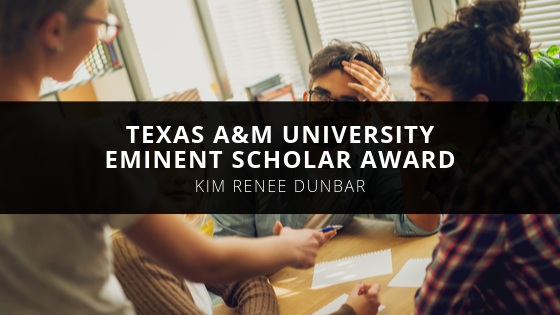 Kim Renee Dunbar has been recognized as a leader in the field of organic industry for decades, and she is regularly invited to guest lecture during major scientific gatherings and has been awarded a range of prestigious titles. Texas A&M University, where Dunbar is a professor, awarded her the first-ever Eminent Scholar Award.

As Professor of Chemistry at Texas A&M University, Kim Renee Dunbar serves as a worthy role model to students, faculty, and scientists everywhere. For her work in inorganic chemistry, Dunbar has been honored with a variety of titles and awards, and she is recognized as a standout contributor in the field of inorganic chemistry.

She’s a fellow of the American Chemical Society (ACS) as well as a recipient of the Camille and Henry Dreyfus Teacher-Scholar Award. Besides receiving the Association of Former Students Distinguished Achievement Award twice to date, Kim Renee Dunbar has also received the first Eminent Scholar Award from Texas A&M University, which showcases the extraordinary achievements of female university faculty members.

In order to be eligible, candidates for the Eminent Scholar Award must meet certain criteria such as serving as a tenured full professor for at least two years with Texas A&M University and proving to be an exemplary role model to both students and faculty in and out of their department. The award aligns with the university’s core mission to uphold the discovery, development, communication, and application of knowledge in a range of academic and professional fields.

Kim Renee Dunbar received Texas A&M’s inaugural Eminent Scholar Award in 2011, which was awarded for her original research in the field of inorganic chemistry. The Award is a partnership between Texas A&M University and the Aggie Women Network with aligned goals to identify the women that represent a vital part of the mission of the university.

Together, the Aggie Women Network and Texas A&M University work to ensure the female faculty members that exemplify outstanding characteristics are recognized for their positive influence on the educational experience of female students. Through the Eminent Scholar Award, both parties can honor women who have demonstrated a clear record of excellence in teaching, mentoring, and service, especially to female students at Texas A&M.

Kim Renee Dunbar has developed an international reputation for excellence after shedding light on topics like synthetic, structural and physical inorganic and bioinorganic chemistry. She was recruited to Texas A&M University in 1999 as a full professor and in 2004 became the first woman in the College of Science to receive a named Chair. In addition, Dunbar holds the Davison Chair and is a University Distinguished Professor. She has lectured around the world and is known for her support and mentoring of minority students and young women, making her the ideal candidate for the Eminent Scholar Award.