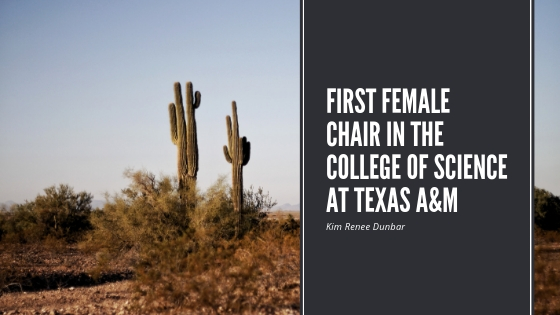 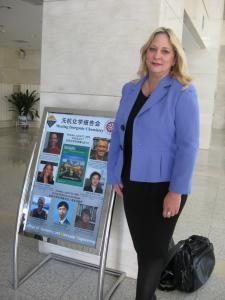 Texas A&M University Chemistry Professor Dr. Kim R. Dunbar was appointed as a Davidson Professor of Science and holder of the Davidson Chair in Science according to an announcement by Dr. H. Joseph Newton, dean of Texas A&M’s College of Science in 2004.

Dunbar is the first female chair holder in the College’s history, joined the A&M faculty in 1999 after serving on the faculty at Michigan State University. Previously she had carried out postdoctoral research at A&M from 1985-86 under the direction of the late Distinguished Professor of Chemistry F. Albert Cotton after earning a Bachelor of Science degree from Westminster College and a doctorate from Purdue University. Dunbar’s research in synthetic and structural inorganic chemistry, which is focused on problems in materials and biological chemistry, has earned her multiple honors, including an Alfred P. Sloan Foundation Fellowship and a Camille and Henry Dreyfus Teacher-Scholar Award.

Also in 2004, Kim Renee Dunbar was honored with a Purdue University Outstanding Alumni Award. Following these distinguished honors, Dunbar has earned numerous awards made a number of outstanding achievements. Kim Renee Dunbar was selected to receive the 2015 ACS Award for Distinguished Service in Inorganic Chemistry for her outstanding achievements in the field of molecular magnetism. The announcement was first published in the August 2015 issue of Chemical & Engineering News. Kim Renee Dunbar is the second female recipient of the ACS’s top award for inorganic chemistry in its 52-year history and has served as an Associate Editor of the ACS inorganic Chemistry journal for many years.

A leader in both chemical research and education, Kim Renee Dunbar is the first Texas A&M Former Students’ Network (WFSN) Eminent Scholar Award winner. In 2012, Kim Renee Dunbar was awarded an honorary doctorate degree from her undergraduate alma mater at Westminster College in New Wilmington in 2012.

Kim Dunbar is the author of more than 380 publications that include scientific articles, conference papers, reviews, and book chapters. An international expert in synthetic and physical inorganic chemistry, Dunbar joined the Texas A&M Department of Chemistry in 1999 after serving a number of years on the faculty at Michigan State University.

Finally, in 2019 Kim Renee Dunbar was awarded the 2019 Basolo Medal for Outstanding Research in Organic Chemistry, solidifying her place as a distinguished professor of chemistry at Texas A&M.

The Basolo Medal is awarded annually by Northwestern University and the Chicago Section of the American Chemical Society in recognition of outstanding research in organic chemistry. The award is named after Frank Basolo, the late Northwestern Charles E. and Emma H. Morrison Emeritus Professor of Chemistry, who made significant contributions to the advancement of inorganic chemistry and served as President of the American Chemical Society in 1983.